The SONGS Coastal Development Permit establishes physical and biological performance standards that must be met by the restored wetland for the project to be considered successful. Pre-construction monitoring studies were conducted at SDL and other southern California wetlands, including those used as reference sites in post-construction monitoring, to obtain data necessary to develop a rigorous but cost-effective sampling program for evaluating the success of the restored wetland post-construction. 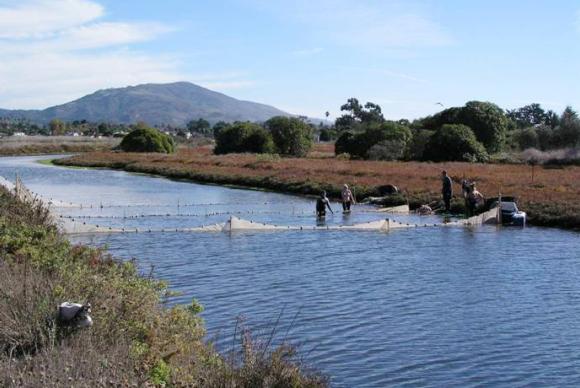 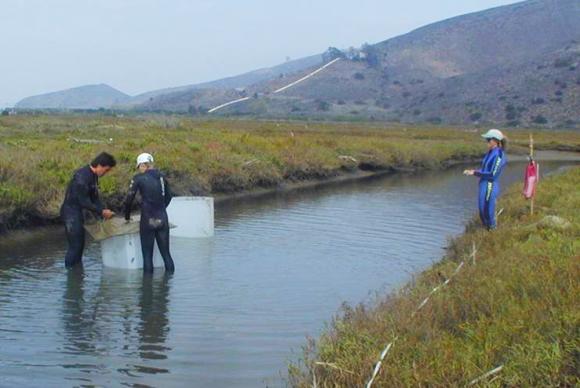 SCE receives mitigation acreage credit for the restoration of tidal wetland. During pre-construction monitoring, CCC contract scientists developed a definition of “tidally influenced” habitat for planning purposes and for evaluating compliance of the project with the SONGS Permit. The goal of the restoration is to produce a naturally functioning wetland that is vegetated with native species, such as pickleweed (Salicornia pacifica = Salicornia virginica), as opposed to exotic invasives, such as sicklegrass (Parapholis incurva). The lower tidal elevation limit of sicklegrass and upland species at a sites in Carpinteria Salt Marsh, Tijuana Estuary, Mugu Lagoon and San Dieguito Lagoon was measured and found to vary among sites due in large part to varying degrees of tidal muting and, at SDL, tidal run-up (Page et al. 2003). However, at SDL, the boundary between native and exotic and upland plants generally occurred lowest at around +4.5’ NGVD (National Geodetic Vertical Datum = Mean Sea Level in 1929) (= 7.06’ Mean Lower Low Water, MLLW). Thus, this elevation served to define the upper limit of tidally influenced habitat for this project and SCE will receive mitigation credit for acreage restored at and below this elevation.

Physical and biological data on the wetland attributes to be monitored during post-construction monitoring were also collected to assist in developing sampling designs for evaluating whether the various performance standards have been met. A principle focus of this work was on developing effective methods for sampling wetland fish, which can be highly mobile and variable in abundance and thus difficult to adequately sample (Steele et al. 2006a,b, 2007).  For example, the most numerous fish in San Dieguito Lagoon are gobies which are best sampled using enclosure traps that were developed during pre-restoration monitoring.